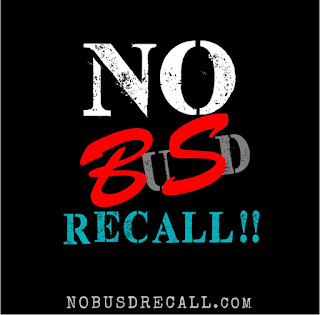 If the recall supporters successfully collect the validated 4K+ signatures from Benicia voters and the Solano County Elections Office certifies the results, the City of Benicia will have to call for a special election. The entire process will cost over $300K, a staggering sum that must be paid by the Benicia Unified School District. Because public schools pinch and stretch every dollar as it is, they’ll be forced to pay the bill out of their general fund, which is the the taxpayer-funded annual budget meant for our schools and our children’s education.
CLICK HERE to learn more about the BUSD Recall process

OUR KIDS PAY THE PRICE

Public school districts, including Benicia's own school district, don’t have the luxury of maintaining a surplus of cash for an "emergency recall fund." Therefore, BUSD will be forced to reallocate funds from their existing budget to foot this recall’s bill.

Where will they get it? Historically, money intended for school supplies, support staff, books and other learning materials, technology upgrades, playground and sports equipment, as well as music and art programs are often the first to be cut. What will our kids have to sacrifice to pay for a baseless special election?

Our schools shouldn’t have to sacrifice a single cent

The recall effort supposedly began in response to Sheri Zada and Mark Maselli’s votes during the October 15th BUSD Board Meeting regarding the return to in-person learning. They, along with fellow board member Gethsemane Moss, voted in favor of postponing the return to in-person learning until after the new year. Former board president and acting trustee Diane Ferrucci as well as former trustee Stacey Holguin opposed a delay; in spite of infection and death rates rising, the holidays approaching, and the lack of federal aid to assist with safety accommodations, Diane and Stacey wanted our schools to reopen ASAP.

The safety of students, teachers, staff, and our community was Sheri and Mark’s number one priority. And while a number of factors went into their decision, “personal agendas” and “wanting to keep kids out of school” were not among them. The scientific data and health concerns that influenced their votes included:

And guess what … they were right to be concerned. Within one month of the October vote, the nation would be experiencing record daily death tolls and spiking infection rates, resulting in a second statewide shutdown which would have completely negated a plan to reopen BUSD regardless of the vote results.

Ironically, at the January 14, 2021 BUSD Board Meeting, the board of trustees voted unanimously to postpone reopening schools a second time, until the 4th quarter, due to the same extremely dire circumstances that Sheri Zada and Mark Maselli based their decision on in late October. All seven public schools will return to in-person hybrid learning by April 12th. Theoretically, a special election could be held in late December 2021, but it could also be delayed to early 2022.

Both Sheri and Mark are up for reelection in 2022, so why burden our schools with the cost of a recall and special election if the board members are up for a legitimate, planned election in less than a year —an election that won't cost our schools a single cent? This timeline speaks for itself: regardless of how Zada, or Maselli, or ANY of the board members voted in October, recall organizer Sarah Mathews Ferrucci, who is BUSD trustee Diane Ferrucci's daughter-in-law, along with her fellow petitioners, would still insist on moving forward with this wasteful effort, no matter what it costs the rest of us.

We understand that the right to recall is a constitutional right, however the decision to exercise it must be made with common sense and this consideration: Does the end justify the means? Recalling elected officials is an action typically reserved for severe cases of negligence, criminal behavior, or corruption. To petition for a recall in response to a school board member not voting the way a handful of parents wanted them to is a frivolous waste of time and money, especially when both board members were elected in 2018 by a record of Benicia votes for a school board election (Zada = 7,913 votes and Maselli = 8,518 votes). To make our kids pay for this recall is indefensible and shameful.

The stated desire to “reopen schools” is the cornerstone argument for this recall, with petitioners often painting themselves as the only parents who care about our kid’s mental health or the importance of in-person learning.

This couldn’t be further from the truth. Virtual learning isn't ideal for anyone: not teachers, not students, not parents. Furthermore, our schools are NOT closed. Dedicated Benicia teachers have been working tirelessly to provide the best possible virtual education during a stressful time that no one was prepared for. As parents, we have always wanted and supported the safe return to schools; not just for our children, but for our teachers, school staff and the vulnerable members in our community. WE ALL care and want what’s best for our children and their education.

This recall has nothing to do with what’s best for our kids. Recall supporters' choice to pull $300K out of their own school district's general fund, a fund that directly supports our kids, rather than focus their efforts in supporting candidates of their choice in a fair and free 2022 election proves that.

This recall is about partisan politics, entitlement, inflated egos and spite

At the end of the day, is this recall worth the trouble, the stress, and the division it creates? Haven’t we all had enough? Enough quarantine, enough fighting over politics, enough having to “pick a side?”

Vaccinations are here and are being administered ahead of the national schedule. Our kids are back in school for in-person learning! After suffering through an entire year filled with sacrifice, uncertainty, tragedy, and loss, our community is finally on its way back to normalcy. We should be celebrating, not creating more discord. Enough is enough.